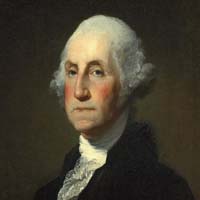 George Washington was the first President of the USA. Washington is universally regarded as the "Father of his Country".

Washington was born on 1732 in a planter family, Virginia. He lost his father at his early age. Hence he had only formal education.

But he was self motivated and learned the morals, manners, and body of knowledge required for an 18th century Virginia gentleman.

His wife name is Martha Custis.

In 1775, he was chosen as the Commander in Chief of the Continental Army. With his brilliant planning, he led the American victory over Great Britain in the American Revolutionary War (1775 to 1783).


As a result, he was elected as president of United States of America twice unanimously (1789 & 1792).His inauguration takes place at New York, the capital city of USA at that time.

He died on December 14, 1799, at his home, located at Virginia. After his death, the capital of USA was moved to his nearest place in his honor.

The Hanging Gardens of Babylon were one of the Seven Wonders of the An...

The sthala-virutcham is a 3,500 year old mango tree located in Kailasa...