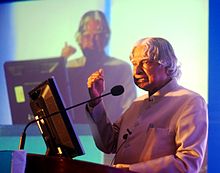 Dr. A. P. J. Abdul Kalam, is an Indian scientist who is popularly known as the Missile Man of India for his work on missile and launch vehicle technology. He served as the 11th President of Republic India. His full name is Avul Pakir Jainulabdeen Abdul Kalam.

Abdul Kalam born on 15th October 1931, in the city Rameswaram, located at Indian state 'Tamil Nadu'. His father Jainulabdeen, a boat owner and his mother Ashiamma, a housewife. As he came from poor background he started working in his early age itself. He distributed newspapers to support his father income to run their family. He raised as "Indian President" because of his hard work. All his lifetime kalam served country as a bachelor. Kalam eats pure vegetarian foods.

Education
He did schooling at the Rameswaram Elementary School. Then he studied physics at the St. Joseph's College, Tiruchirappalli in the year 1954. He did aerospace engineering at the Madras Institute of Technology , Chromepet, Chennai.
Career
Kalam started his career by designing a small helicopter for the Indian Army. In 1960, Kalam joined DRDO (Defense Research and Development Organization) as chief scientist. He was also worked under Vikram Sarabhai, the father of the Indian space program in INCOSPAR committee. Th 1969, he becomes the director of ISRO project "India's first indigenous Satellite Launch Vehicle (SLV III)" which successfully deployed the satellite "Rohini" in near earth orbit in July 1980.
During Pokhran-II nuclear tests kalam played as the Chief Project Coordinator and an intensive technological role. Snapshots of him taken by media at this time shown him as the country's top nuclear scientist.
Why Abdhul Kalam is being called 'Missile Man of India' ?
During India Gandhi period Kalam was invited to direct some secret missile program funded by Prime Minister India Gandhi with her power. Union Cabinet disapproved this project so kalam has to classified this as an aerospace project and continued it. With kalam's effort India made advanced Missiles during this period. Agni, Prithivi missiles are designed during this time only. Later Cabinet approved this project and funded 388 Crores. This is why kalam is being referred as 'Missile Man of India'.
Books
Kalam wrote several books in his career. He got more interests on writing tamil poetrys, playing veenai (south indian musical instrument). Some of the books written by him...
Awards
Kalam received honorary doctorates from 40 universities so far. Government of India honoured him by Veer Savarkar Award, Indira Gandhi Award for National Integration, Bharat Ratna, Padma Vibhushan and Padma Bhushan awards.