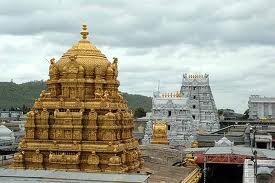 Tirumala Venkateswara temple is a Greatest Hindu temple in the hill town of Tirumala near tirupati. Located in Chittoor District of Andhra Pradesh in India.

The ancient and sacred temple of ‘Sri Venkateswara’ is located on the seventh peak of Venkatachala in Seven hills.

This temple is the richest & highest pilgrimage center after the Sree Padmanabhaswamy Temple in Thiruvananthapuram, Kerala.

The Pallavas of Kanchipuram (9th Century AD), Cholas of Tanjore (10 Century), Pandyas of Mathura and Vijayanagara pradhans (14th & 15th Century) were committed to devotees of Lord Venkateswara. After vijayanagara Empire, kings from different states, King of Mysore and Gadwal. Worshiped the lord as pilgrims and gifted various ornaments and valuables to the temple. Raghoji Bhonsle, the Maharastrian Commander, Visited to the temple, made a permanent arrangement regarding the regular pujas done to the Lord.

1843 the temple up administrative authority of venkateswara temple, 1933 the Madras Government appointed a Commission to Tirumala Tirupati Devasthanam. Through a special statutory authority to run the administration of the temple.

You may like...
Skardu - Must see tourist place in Pakistan

Skardu town is the capital of Skardu District located in the North par...

Munnar hill station is one of the most wonderful mountain tourist plac...

Hogenakkal Falls is one of the awesome waterfalls in Tamil Nadu on the...

Udhagamandalam better known as Ooty is the most popular hill station i...