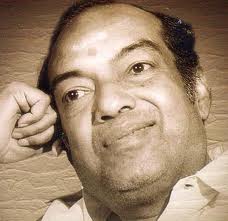 Kannadasan was one of the greatest and most important writer in Tamil language. He contributed around 5000 lyrics besides 6000 poems and 232 books, including novels, epics, plays, essays for tamil language.

Kannadasan was born on june 24, 1927 in the place of Sirukudalpatti,Tamil Nadu. His real name is A.L.Muthiah.

Kannadasan had great love for the Tamil language and culture. He read the Thiruppavai of Andal, and was amazed at its mystic poetry. After a lot of interst, he decided to reconvert back into Hinduism, renamed himself as Kannadasan, dug deep into understanding Hinduism, and wrote his series of  books on Hinduism in the name of "Arthamulla Indu Matham".

Kannadasan  also did not live a cocoon-type life. He dipped into everything that the Tamil Nadu could offer – wine, women, drugs, gambling, politics, polemics, atheism and religious sanctuary.

After enjoying everything, what he did was remarkable – he composed verses about all his experiences in song lyrics . These affects the people  of Tamils from all ages Groups starts from schoolboys, undergrads, housewives, farmers, manual laborers, plantation workers, middle class representatives and even upper class elites.

Kannadasan’s acting role in the Tamil movie Parasakthi in the year 1952.Parasakthi became a super hit  movie in Tamil cinema history, because it was enriched by the captivating debut performance by SivajiGanesan, script by M. Karunanidhi.

Kannadasan died on 17th  October 1981 in Chicago, United States, where he had gone from India to attend a Tamil conference organised by the Tamil Association of Chicago.

A house of Kannadasan in Sirukoodalpatti is now maintained as a memorial place.

You may like...
Gautam Gambhir - The best Indian opener since Sunil Gavaskar

Gautam Gambhir is one of the leading cricketer in the Indian cricket t...

The Mont (originally built as Seawise Giant) was the longest ship in ...