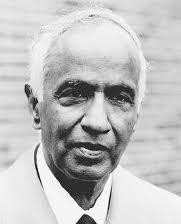 Subrahmanyan Chandrasekhar was an Indian-American astrophysicist who won Nobel Prize in 1983. He called as "Chandra" by everyone. The word chandra means "moon" or "luminous" in Sanskrit.

In 1910, Subrahmanyan Chandrasekar was born in Lahore. His Father Name is Chandrasekhara Subrahmanya Ayyar, he was a Government officier and his Mother Name is Sita Balakrishnan. She was a highly intellectual women for translating literary works into Tamil. He studied at home itself in private tutors.

In 1936, he married Lalitha Doriswamy. In 1937 he joined faculty of University of Chicago. He was one of the first scientist to couple the study of physics with the study of astronomy.


In 1966, Laboratory for Astrophysics and space Research(LASR) was built by NASA and Chandrasekhar occupied one of the four corner office on the second floor. During World War II, Chandrasekhar worked at the Ballistic Research Laboratories to solve the problem of ballistics.

In the year 1990-1995 he worked on a project to explain details about geomentric arguments used by Sir Issac Newton and their methods of ordinary calculus. In the year 1995, he published a book “Newton's Principia for the Common Reader”. He become a honorary member of International Academy of Science.

In 1983, chandrasekhar was awareded the Nobel Prize in Physics due to his studies on the physical processes involved in the structure and evolution of stars.

In 1995, chandrasekhar died in Chicago due to heart Failure.

You may like...
Alfred Nobel - The man behind the Nobel Prize