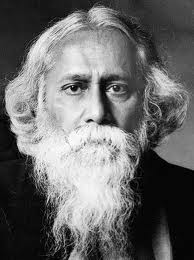 Rabindranath Tagore was a bengali poet, who won nobel price in literature in the year 1913. He is the first Asian to win the Nobel Prize in Literature. He is the composer of Indian national anthem as well.

Rabindranath Tagore born in calcutta,India on May 7th 1861. His father Debendranath Tagore, a Hindu philosopher. His mother name is Sarada Devi. He is the youngest of thirteen children to his parent. He lost his mother in his early age itself. He grown up in the hands of servents as his father travels all the time. He was not interested in the studies but in writing and bengali poetry.

Rabindranath Tagore married Mrinalini Devi on 1883 and the couple got five children.

Tagore composed 2230 songs. Most of his creations were on Bengali language.

Rabindranath Tagore died on 7th August, 1941 due to illness.

You may like...
Guru Nanak Dev - Founder of Sikhhism