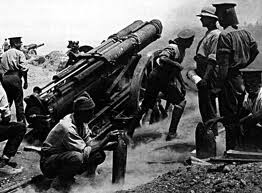 First World War starts at 1914 and ends on 1918. It starts between Austria and Serbia .

On June 28th , 1914  Archduke Ferdinand , the king of Austria and his wife were shot dead in Sarajevo, by a group of six serbian  assassins.
The Team
In this war Britain, France, Russia, Italy , Japan , china supports Serbia .
Germany , Hungary , turkey , Algeria supports Austria.
It ends on Nov of 1918  , as germany was defeated.
Loss
This war happens about 1561 days and about 2 crore people dead on this . About 40 lakh crore dollar property was damaged during this war. After this war Austria was separated into several parts(Poland , Yugoslavia , etc ).
To know more about first world war visit this link ...
www.firstworldwar.com

You may like...
Ferdinand Magellan - First Person to Sail Around the World

Ferdinand Magellan was a Portuguese explorer who sailed around the wor...

George Washington was the first President of the USA. Washington is un...

Nian is the grandest festival in Chinese tradition. It was also called...